On Sunday the 29 th of April we went in Ring of Kerry direction the plan was scouting – See some new places but mostly find out what are the sea conditions. We were not thinking of getting into the sea however the gear was there ready! We decided to go to Ballinskelligs first as it was one of the closest locations. We arrived around 9 am the tide was going out since 7am – not the best time for fishing. We looked at the sea and couldn’t believe the water was just crystal clear. You could see every single stone on the seabed. It didn’t take long to get changed and be in the water. The temperature of sea 8-9 degree visibility 5 mts and no swell at all. After 5 minutes of swim I spotted big enough mullet going in my direction – pressed the trigger and here we go the dinner is sorted for today. 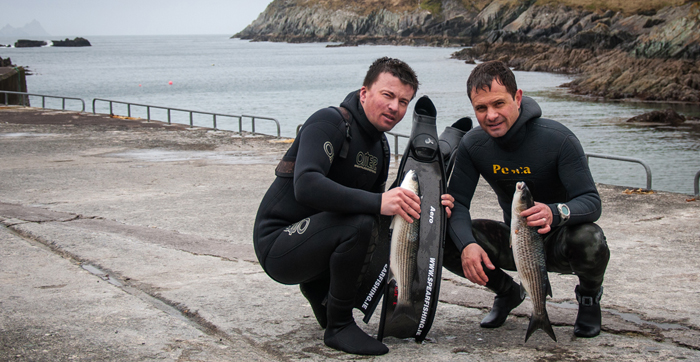 I swam another couple of meters and I couldn’t believe my eyes it was the biggest shoal of mullet I have seen in my life. It was like a thousands of mullet all moving in the same direction. I was waiting and looking at it. It was like an endless current of fish moving smoothly the same way , same direction like an one big marine creature. The speargun was loaded and ready to go again but I just couldn’t disturb the harmony of the view. We spent 1 hr and 30 minutes in the water. We shoot 2 mullet and seen thousands more. We also saw few very small wrasse but no sign of pollock. The plankton is arriving too. It looks like we going to have great spearfishing this year guys!