Since 2011, in order to spearfish in Italy, you need to register for free to a government website and print out a receipt to prove you have done it. Unfortunately this website is not translated. Such a receipt must be shown to the coast guard officers when you are at sea. There are a few more regulations to bear in mind that are in most of the cases very questionable because they were established in the sixties and never updated:

The Spearfishing Regulations in Italy

Here is the link to register and get the licence >>> www.politicheagricole.it

Very important thing you need to defend yourself from is the boat traffic. Do you know what people generally say about Italians when they drive cars and scooters on the roads? Well when they use a boat they are even worse so you are likely to get hit when you come out of the water after a dive. 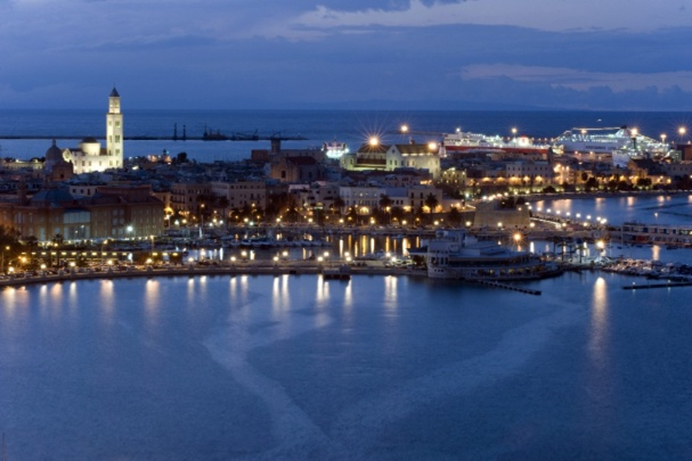 As you can easily understand, spearfishing in Northern Atlantic is far different from spearfishing in the mediterranean sea. It’s not only about tides, weather and fish species but also about different spearfishing techniques related to different fish habits.
Italy offers a wide variety of underwater landscapes so before leaving for a spearfishing trip you should carefully know the area and the relevant technique to use. The best Italian region ever is of course Sardinia that is characterized by a lot of fishes and a rocky seabed allowing you to have a good visibility (about 15/20mts) even when the sea is not calm. 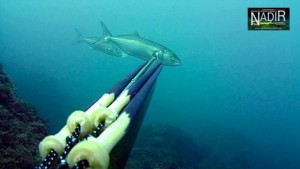 There are many other regions that share common characteristics like Tuscany, Liguria (south of Genoa) and Sicily but they are not really alike. The eastern coasts of Italy, from Venice region down to Gargano and the coasts near Rome are mainly characterized by an almost constant low visibility due to different reasons. The eastern coasts are mainly characterized by a sandy seabed while the Roman one is rocky but the presence of several rivers bringing debris substantially lowers the visibility. The Salento region is also similar to Sardinia in terms of fishes, visibility and sea bottom but in this article I would like to introduce you to spearfishing in my hometown area that is Bari.
Bari is located south east of Italy in front of Albany on the Adriatic sea, in a region called Apulia that in latin means “no rain” so you can understand how the weather is like. The air temperature on average here ranges from 5° to 35° with very rare exceptions. As a consequence in the wintertime the water temperature never goes belown the surface. There is a rocky sea bottom that slopes very gradually so this implies that you have to get as far as 800mts from the coastline to dive up to 16mt depth. Off the coast, at about 30mt depth instead, the seabed is muddy and this strongly affects visibility. Whenever the sea gets a little nasty the visibility falls dramatically. Very often here in the wintertime and the springtime we spearfish with less than 2mt visibility so we are obliged to shoot the fishes silhouettes.
Although the uncomfortable sea conditions we can dive all the yearlong but the best season ever to do it is definitely autumn, so let’s say from late august to November.
That is because in this period holidays are almost over so there is no boat traffic at sea, the water temperature is pretty much the same from 0 up to 30mt depth and there is a lot of fish, especially amberjacks and garricks (leerfishes). 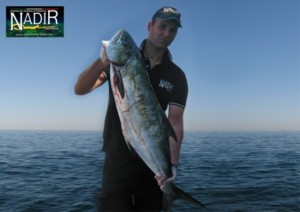 The most common preys in such a period are red snappers (dentex dentex), gilthead breams, breams, blue fishes and if you are lucky amberjacks and garricks. In the wintertime instead you can almost only shoot sea basses and mullets.
The main issue here is represented by the fish suspicious behavior that being unable to depend on their sight, due to a low visibility, are very focused on movement detection through their sensorial apparatus. As a consequence, you need to have a perfect technique to prevent fishes to understand you are approaching and that you are a threat.
The best catches can be done when a weak northern wind blows instead in presence of eastern ones the water turns into chocolate and you can’t see anything.

In the wintertime the most profitable technique is crawling in shallow waters in search of sea basses while in the summer / fall time you should use the waiting technique for red snappers and gilthead breams. In the summertime it is very important to know the area you spearfish in because of the presence of a distinct thermocline at about 13/16mts. This implies very often two things: visibility above the thermocline is dramatically different from the one below 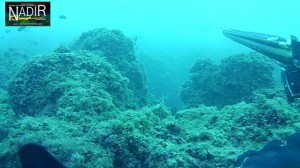 (it might be worse or better according to the currents) and fishes tend to group in warmer water so diving in deeper waters might be useless. A 7mm tailored made wetsuit is a good option for the wintertime while in August / September a 3mm one is mandatory! During all the rest of the year you can use a 5mm wetsuit. In regards to the spearguns in the wintertime a 80cm railgun is the most versatile one for the kind of fishing you can, in the summertime instead a 110cm double roller railgun or a 110cm double band speargun is mandatory for great catches. 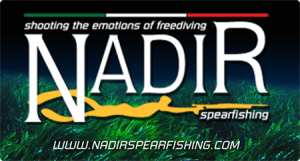 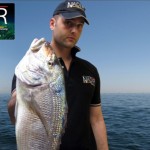 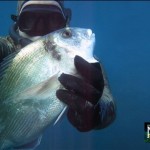 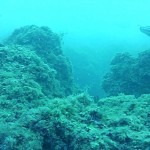 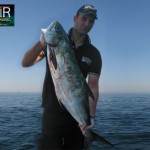 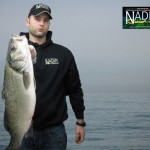 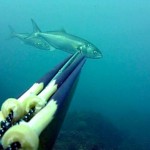