In the past 3 months we were testing 2 new wetsuits from TECNOBLU in Italy. The particular wetsuits were smooth on the outside and open cell on the inside. TECNOBLU wetsuits are exclusively made to measure in thickness 5mm, 6.5mm, 7mm and 8mm and are composed of jacket and trousers with a high waist. The cut is fully tailored and is manufactured with use of a new type of Velcro which is very sturdy and ensures perfect seal even after long time of usage. Many accessories are available to be added on request such as classic reinforcements on the elbows and knees; sternal support external or internal, long john trousers and much more …

For this review we are using 2 complete smooth wetsuits 5mm and 7mm – made to measure. The model is called Liscia Mimetica and the neoprene used is the Heiwa SK 1. We immediately appreciated the attention to detail, camouflage made by hand and the new material’s remarkable softness and elasticity.
There are also lined pieces around the inner thighs and around the waist in order to add for 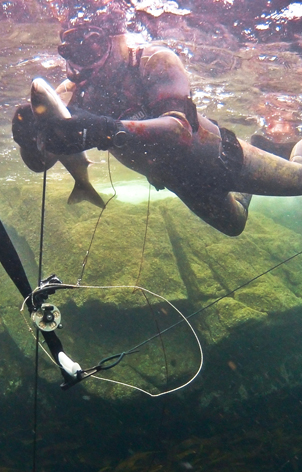 
strength and longevity to the wetsuit. On the inside of the wetsuit where different cuts are made, there is some reinforcing material in the shape of one euro coin to add more strength and avoid tearing of the joints
We started testing the new wetsuits in April when the temperature of water was still around 9 degrees .The wetsuits fitted like a glove as the cut is perfectly tailored and we were impressed by the density and elasticity of the materials used.
In the water we found ourselves very comfortable, We did not get any feeling of coldness (April) even after 2,5 hours in the water.
However, we think that one of the best features of this wetsuits, can be seen when increasing the depth.
In the past few weeks we have had the opportunity to try fishing in deeper water and the high density neoprene has passed the test of the so called “crushing” of the material.
At the end May and beginning of June we found that the 7 mm wetsuit was even too warm in shallow or surface swimming – however, it was perfect for 10+ mts dives. The seams are very nicely sealed and a lot of attention has been paid to every detail.

To date, despite intensive use, we have not noticed any signs of wear or infiltration of water.

We would like to recommend the purchase to anyone who needs “all year around” wetsuits but also people who do not have problem with diving 12 mts and more. The wetsuits can be purchased on your request with lot of different camouflage colouring combinations and lot of accessories.

For more visit http://www.tecnoblumute.it or drop us an e-mail at info@spearfishing.ie