Spearfishing in Ireland by Mike Orth with Nikitas Nomikos and Rafal Napierala from spearfishing.ie

When I first considered writing an article on spearfishing for subsea, I thought my submission would be welcomed by an underwater community that shared my love of all things related to diving. As I gathered information and made contacts familiar with the sport, both old and new, I soon discovered spearfishing was revered and reviled in equal measure by many. How could this be I thought? Spearfishing is such a challenging endeavour, pitting diver against fish on equal terms, what is not to respect? It was my good friend and mentor Ronnie Hurley that summed up the general mood after a weekly meeting in the Loch Bar, “tread carefully” he said. 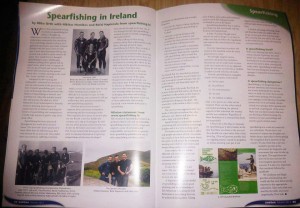 Intrigued by the warning but undaunted I continued my research. I met up with several of the great divers from Ireland’s spearfishing past, I read some of the books that documented the history of spearfishing in Ireland, and searched out other like-minded people that still practice the dark art. Mick Moriarty’s book Submerged is a fantastic resource detailing most aspects of underwater life in Ireland, including the history of spearfishing and competitions, I would urge anyone to grab a copy from head office.

Spearfishing has been practiced throughout the world since ancient times. The first Irish divers practised it more often than SCUBA because they were limited by air and cold. They didn’t have easy access to refill their SCUBA tanks or even the toasty dry suits we use today, wearing Aran jumpers is as difficult as it sounds I’m sure. So with empty aqualung, and a passion to still get underwater, they practised snorkelling and spearfishing regularly.

The first divers were fit men. I suppose they came from competitive swimming and fin-swimming circles. They regularly dove down 20 meters plus on one breath. I met Joe Roddy this summer on a slip in Portmagee, he told me one of his greatest achievements was to dive to 30 meters and return with a fish. It was natural that these guys would want to measure themselves in spearing competitions which soon developed from the 60s through to the late 70s. It was during this time that spearfishing reached its peak in Ireland, competing at international level.

When talking to these diving pioneers about their achievements in the sport, although proud of where spearfishing took them, there is tinge of regret from all concerned. If it was competitive tournaments that caused the sport to die out in this country, then it is good to hear the current community has no interest in reviving this. Shoot for the table only, not for practice or just for fun is the motto I hear these days.

It was time to seek out the Irish spearfishing community, to find out exactly what the state of the sport, thought lost so many years ago, was about these days. It did not take me long to discover a vibrant and growing group of spearos that were gathering. They were meeting online in a new forum, exchanging their ideas and working together to further the sport. I met two of these individuals, that recently launched a new website dedicated to spearfishing.

The mission of Spearfishing Ireland is to promote ethical, safe and sportsmanlike spearfishing practices, to encourage and support a sense of environmental responsibility among divers, to provide basic spearfishing guidelines for use in other spearfishing activities, and to participate in educational and scientific programs.
Promote the highest ethical standards of sportsmanship for spearfishing in Ireland;
Maintain on-going dialogue with spearfishers all over the Ireland, and consider the international community in its decision making processes;
Work with the scientific community, fisheries management organizations, fish and game departments, together with spearfishing clubs around the world, to increase our knowledge of the environment, as well as to educate and encourage environmental responsibility among divers and the public;
It is hoped that the Spearfishing Ireland will motivate freedivers to participate not only in an apnea record attempt, but also in the selective and honorable sport of spearfishing.

It was these lofty goals that lead me to meet Rafal and Nik and to ask them to contribute to this article, in the hopes it might promote their ideals to others interested in taking up the sport. The remainder of this article is their words, not mine.

The oceans cover approximately two thirds of the planets surface; they also influence our climate and provide us with a large amount of food.

Spearfishing is a sustainable method of catching fish, is becoming increasingly popular and it is a very exciting sport.

The Irish coast has so much to offer and people are aware of that. No matter how much or how little you know about the sport, it will always be a continual learning curve full of experiences and breath taking underwater scenery.

Every trip to the sea will be different and something new can be learned everyday. Basic common sense applies when you are going out to sea.
It must be respected at all times. Sea is not our friend nor is our enemy. It can be either to us at any time.

A big part of being successful at spearfishing is down to good planning and understanding of fish behaver. Knowing the fish behavior is something that can be achieved during time. Taking note of dates, areas, tides and techniques used to catch fish will prove to be invaluable to you in the future.
Spearfishing should be fun as well as providing you and your family with the freshest and tastiest food.

A note of caution though-some species are still in danger so we have to make sure that we follow the regulations and respect the closed seasons for some of them.

It is very important to protect and conserve this beautiful ocean for many generations to come.
We strongly support marine resources and protection initiatives. Because we can see underwater we have to be very conservative on our approach. Please don’t take juvenile fish or shellfish in order to avoid reduction of stocks.

Overall, spearfishing has negligible impact to the aquatic environment:
• No by-catch
• No pollution
• No contamination
• No nets
• No rubbish or debris

Only a few species at a time can be targeted. There are also other natural constraints including; the physical capacity of the individual, the weather and the sea conditions. Regardless of these limitations it is essential that divers act responsibly

A float with a dive flag is a necessity for spearfishing as it alerts boaters to the fact that there are divers in the area and they should not come within 50m of that dive flag. (This will prevent possibly fatal or crippling injuries caused by propellers, as well as ensuring your gun is not ripped from your hands if a boat unknowingly motors across your float line.)
A further advantage of having a float and float line is that you will be able to let go of your gun when shooting large fish, knowing that you will be able to get to the surface for air while still retaining your gun and catch. Additionally, when shooting into caves, or around rocks and reef, your shaft may get stuck. Having a float and float line means that you are able to easily track down your gun, even in poor visibility or strong current. For these reasons, it is easy to see why a float and clearly visible dive flag are requirements for safe diving.

Is spearfishing dangerous?
Spearfishing in not dangerous if you practice awareness and common sense use of your spearing device. Serious injury or death can occur if you are not carefull when spearing. DO not point your speargun in the direction of another person even if it is not loaded. Always unload your speargun before getting back on the boat or getting out of the water. Make sure you know exactly what you’re shooting at before shooting. Pay attention to your surroundings and practice good common sense.

Spearfishing.ie is a web site created by two individuals. We felt that it was necessary to express our thoughts and beliefs about a sport that is slowly getting the recognition that it deserves in this country. We also think that a site was needed to provide all the information for beginners and newcomers that want to take up the sport. The regulations are there to be seen and also the most frequent questions and answers. It is also very important that everybody follows the guidelines
We condemn any illegal practices and poaching and make sure to report them in case you see any. Take only what you need for the table and more importantly… Dive Safe 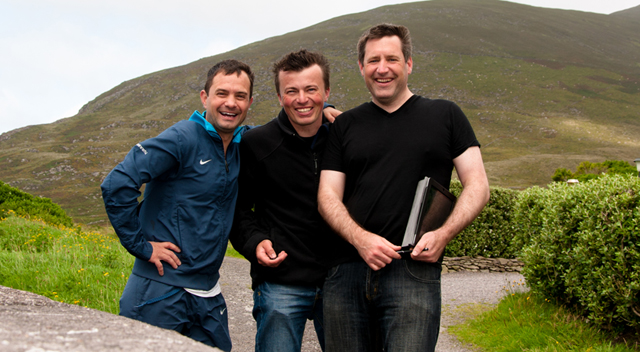