This trip was actually planned a few months ago when our partner and sponsor Piero Scelfo (team-Tecnoblu) told us that himself and his mate will be coming to visit the Emerald Isle. The time was fixed at 8.00 am and I was all excited the night before that I barely got some sleep. When the alarm went off, I jumped out of the bed, had a quick breakfast and started my journey to collect the guys. The weather was awful. Heavy mist, grey-black skies, but the excitement was so big that we all didn’t care about the rain.When I arrived at the B&B a lovely rainbow was formed in the sky and a very “shy” sun begun to shine through. “Good Sign” … I said. 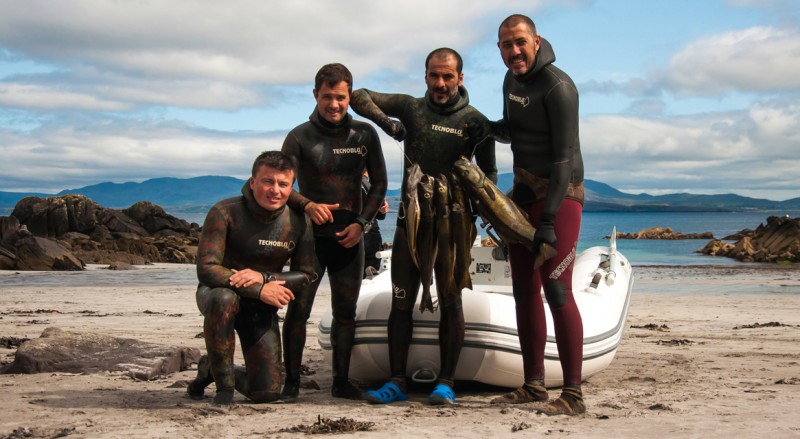 Spearfishing with Tecnoblu Team in Ireland

The Italians were on time, excited themselves! We had decided to take them to a spot were there will be a mixture of sandy bottom, kelp forests, heavy rock formations with depths ranging from 5m to 20m.
When we arrived at the location the sun was shining. We started unpacking the gear and pumped up the dinghy. After 15 minutes the guys realised that they had forgotten the weight belts!!!
I didn’t panic and I drove back to the B&B to collect the belts. An hour later we were in the water. Me and Rafal went to one direction and the Italians to the other. Very soon we realised that the fish were scarce. We had decided to put a limit on the catch of about 10 fish so we were waiting for the bigger ones to show up before we shoot anything.
After 2 hours in the water we had taken 2-3 fish and we decided to visit the corner of a headland expecting bigger Pollock. In the next hour we managed to get another 7 fish with the biggest one around the 4kg.
After a total of 3,5 hours in the water we decided to finish our session and return to the beach were we had launched the dinghy.

Met a few middle aged lads that they were very curious about our catch and asking a few questions. They were having a barbeque with all kinds of meat and we offered them a 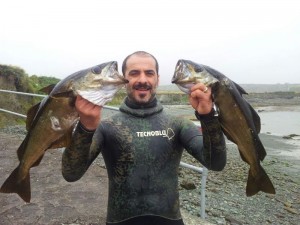 couple of fish for the taste. They politely declined our offer saying that pollock doesn’t taste very nice!!! I must say that it was really a pleasure to have met the Italian lads. Their company was great, the chats we had in 3 languages…you can imagine! They were fantastic in giving tips and advice and they had done their homework before diving in the North Atlantic’s environment. Their techniques of spearfishing were performed to perfection and safety. They brought back to me all the memories that I have, from diving in the Mediterranean sea.
The fish were going to be consumed by ourselves and the families and a few of them were given to the owner of the B&B that the guys were staying, and his family.
My next stop was Waterville in the ring of Kerry. I had arranged to meet Henry and Lucy the owners of a fantastic B&B on the beach , opposite the Waterville Links Golf Club. 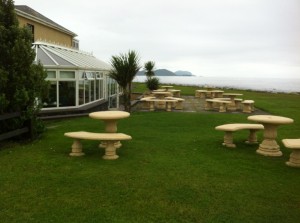 The famous “Smugglers Inn”. If you are ever down this way the Smugglers Inn is the place to stay. Henry the Chef prepares 5 star courses with great ability and taste. The rooms are beautifully decorated and they all have amazing views of the Ballingskelligs Bay. Myself, Lucy and Henry decided to give it a go and go for a short spearfishing session at the back of a big headland. Going down the mountain was the easy part.Coming up though I felt out of breath a couple of times.Knowing my age of course…
We spent about an hour 1,5 hours in the water, got 2 medium Pollock, a mullet and I saw a shoal of triggerfish. Didn’t manage to get any as I was really tired and kept missing them.
Visibility on both days was 5-10 meters and water temperature 17-18 degrees.

Back to work the following days was not 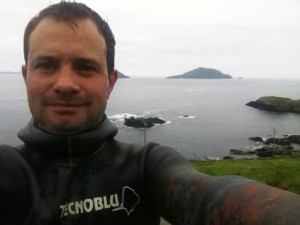 easy. All the memories, the laughs ,the craic kept coming back. This is why I love this sport. Meet new people that they share the same passion with you, have a laugh, make new long lasting friendships that can even take you to other parts of the world and get a fish or two for the table
It doesn’t get better than that!
Stay Tuned